Artist, organizer of exhibitions and international curator of Susanne Wenger 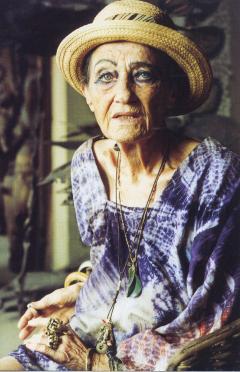 Susanne Wenger was living in Nigeria for almost sixty years. Susanne Wengers impressive artworks, the world famous "Sacred Groves of Osogbo", her importance as a painter, architect, sculptor, guardian of the endangered trees of the rainforest, spiritual and religious bridge between cultures, briefly to characterize  this emancipated, courageous woman and artist completely is almost impossible. Despite great international recognition, she was still an "infant terrible" of the European art scene. Too far away of all common classifications was her life in fact a work of art. Despite the media presence through numerous film documentaries, books and the journalistic reports she has remained greatly mysterious. That her live and her art also had "political" dimensions has been demonstrated by her engagement against the nazi suppression between 1938 and 1945 and her sympathies for the Nigerian independence movement!

1949 recovered again, Susan Wenger travelled to Rome and Sicily and later to Zurich, where she exhibited in the gallery which represented some of the most famous artists of the time, such as Hans Arp, Sophie Taeuber, Piet Mondrian and Paul Klee! Later in Paris, Susanne Wenger, where she met Uli Beier she made a fateful decision on the paths to success.  With him she decided to leave Europe behind and went to Africa. There, she found ultimate self-discovery and self-realization and became one of the most extraordinary figures and a much greater artist. 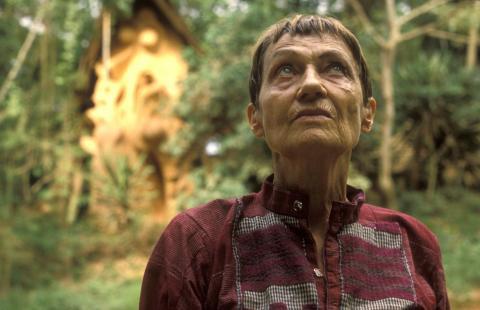 1984, a series of events triggered  Wolfgang  Denks decision to fly to Nigeria and to meet Susanne Wenger and her work in Osogbo. Prof. Denk, a well known artist in Austria, had never been to Africa before; he had dealt with archaic cultures and megalithic culture in his own artwork. West Africa was not on the agenda but immediately he was impressed by the Yoruba culture and the great art of Susanne Wenger! Meanwhile he visited Osogbo more then twenty times, where he always made a stay in the Groves and Susanne Wengers residence and met her adopted family! Than he already started to prepare exhibitions and books on Susanne Wenger. Shangodare and Doyin became his friends and where often invited to his house in Austria when they where accompanying Susanne Wenger to her European exhibitions. All of them, curated by Prof. Denk, and this where really a lot in 29 years! 1985 was the first anniversary exhibition. He then organized in the famous House of Artists on behalf of the Austrian Ministry of Education.  He brought Susanne Wenger (70) back to Vienna after 35 years of absence to exhibit opposite her former Studio! Ambivalent feelings struck him when he was still radically foreign in the face of wild nature and the monumental expressive architecture and gigantic sculptures in the dramatic jungle of the Osun Groves of Osogbo along an African river of primeval force. 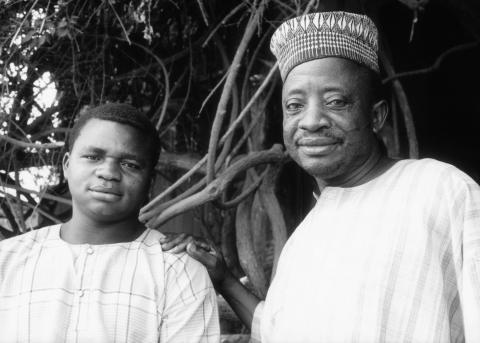 But immediately rapture was reinforced in his mind and simultaneous intimacy also. It was one of the strongest artworks integrated into the nature to be faced! And Susanne Wengers living and art in Osogbo he encountered earlier inescapably captivated him for the next decades. This symbiosis between archaic and modern this new global cultural approach impressed him deeply. Later also an intensive cooperation was build up with the Nigerian AOT (Adunni Olorisa Trust). Adunni Olorisa is Susanne Wengers Yoruba name! Prof. Denk ever since worked a lot to publish the art of Osogbo and the efforts of „The Lady of Osogbo“ to keep the heritage of Yoruba Culture alive. 1995 when he was preparing the monumental second anniversary exhibition in Krems, Austria, the Susanne Wenger Foundation was established as well. Even Wole Soyinka and Uli Beier came to Krems. Soon after this extremely successful event Prof. Denk started the Susanne Wenger Archive in this town. There in 2011 the new Susanne Wenger Foundation Gallery was build and opened with great support of the Government of Lower Austria. The opening was praised by visitors from all over the world!

Going to Nigeria so often the own artwork of Wolfgang Denk was influenced by the dynamic forces of Osogbo. At least he also painted series of „African Paintings“!